In this section, you or a loved one can find out more about migraine the disease as well as treatments for migraine. We also provide practical advice about migraine and offer tips on how to tap into your support network. Read on and you’ll find answers to some of your questions as well as links to resources with more information. Being informed is an important first step towards becoming an active decision-maker in your care plan.

Migraine is a headache involving severe throbbing pain or a pulsing sensation, usually on one side of the head, that gets worse with physical activity. The pain is generally around the temple and eye, but it can also be felt anywhere in the head and neck.

Migraines are frequently accompanied by nausea, vomiting, and extreme sensitivity to light and sound. Migraine attacks can last for hours to days, and the pain can be so severe that it interferes with your daily activities.

For some people, an “aura” occurs before or with the headache. An aura is most commonly visual (flashes of light or blind spots) but it can also be tingling or numbness in an arm, leg and face or difficulty speaking.

Doctors classify migraine as with and without aura and by frequency of headache.

Migraines have 4 main phases; however, not everyone experiences all phases.

Phases of a migraine headache

Finding out you suffer from migraine headaches can leave you feeling overwhelmed, so it's crucial to reach out for help and information from people who are close to you and to your healthcare team. Along with obtaining the best possible medical support and treatment, it is important to make your emotional and physical wellbeing a priority, to ask for help and support when you need it, and to nurture relationships with compassionate people who enrich your life. You don't have to do it alone – there are many ways to manage your daily life with your healthcare team, family, and friends, as you will see in the following sections.

Scientists do not completely understand what causes migraines; however, genetics, environmental factors as well as electrical and neurochemical mechanisms seem to play a role.

In people who suffer from migraines, the nerve cells in the brain are more easily stimulated. When electrical activity due to stimulation spreads through the brain (called “cortical spreading depression” or CSD), various functions, including vision, sensation, balance, muscle coordination, and speech, may be temporarily affected leading to the symptoms of aura visual such as flashes of light or blind spots, tingling or numbness in an arm, leg and face or difficulty speaking.

The CDS “wave” can lead to aura

The actual migraine headache occurs when the trigeminal nerve in the brain is stimulated. This nerve may release substances that cause painful inflammation in the blood vessels of the brain as well as the layers of tissues that cover the brain. This inflammation causes the main symptoms of migraine such as the throbbing headache, nausea, vomiting, and sensitivity to light and sound. 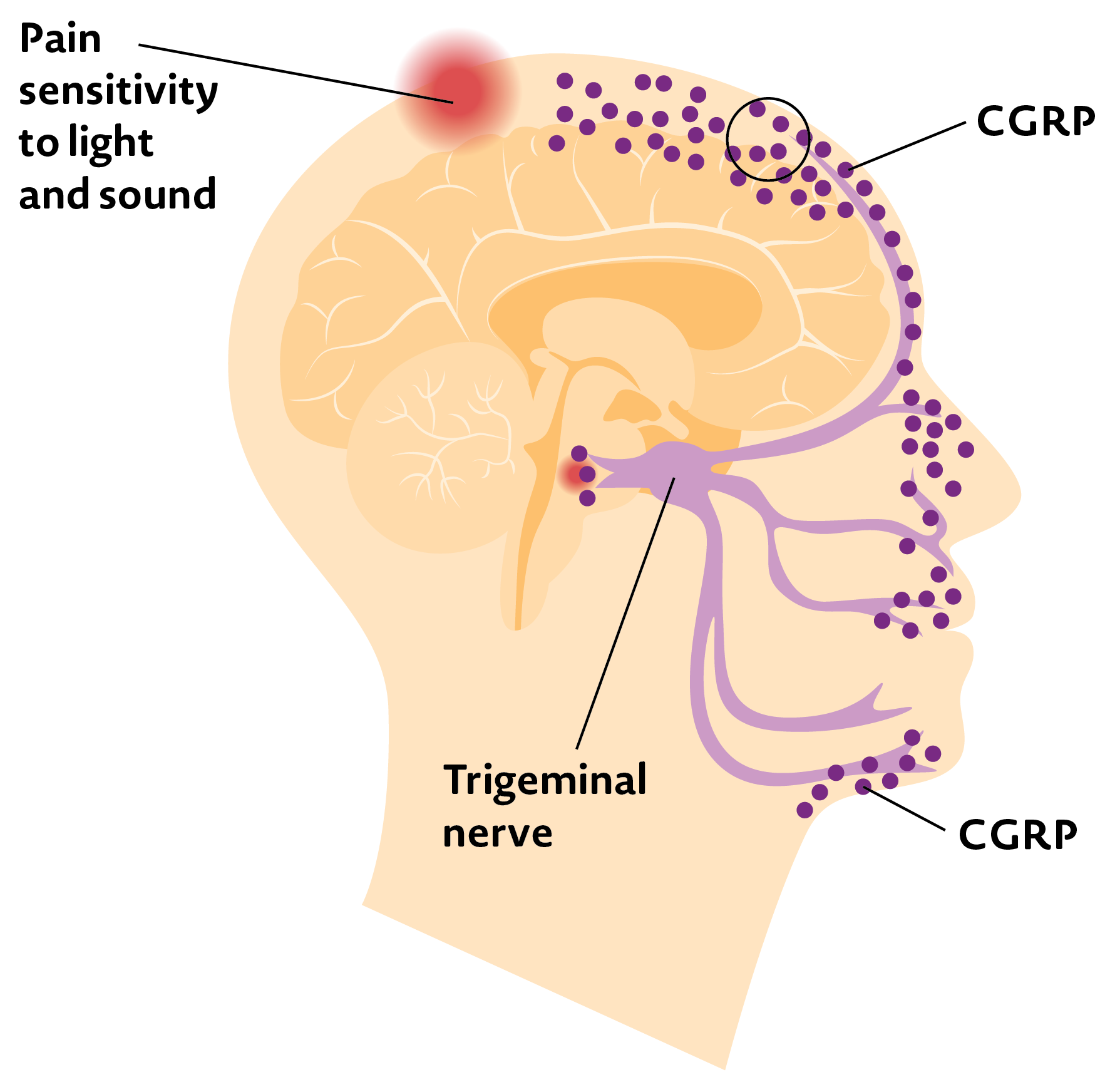 Imbalance in brain chemicals such as serotonin (which helps regulate pain in your nervous system) and calcitonin gene-related peptide (CGRP) (an inflammatory substance that dilates blood vessels and causes pain) could also be involved in the migraine attack.

Migraine triggers increase the chances that you will have a migraine attack. These triggers can be from within your body such as hormones and feelings, or external, like weather changes and smells.

Triggers can vary between people and sometimes more than one trigger is needed to cause an attack.

WHAT ARE THE EFFECTS OF MIGRAINE?

A prognosis is the doctor’s best estimate of how disease will affect a person and how that person will likely respond to treatment.

In addition, during the headache you must have had at least 1 of the following:

The signs and symptoms of migraine will vary between patients, between migraine episodes and between phases of an episode in a patient.

Are there other associated conditions?

Associated conditions that can occur in people with migraine include:

Complications are conditions that result from migraine, examples of complications include:

When you have migraine, you may need different types of support at different times. Your friends and family can help, along with your team of health care professionals.

Living with migraine can make you feel isolated and sad; especially when you must adapt or change your daily routine, see many health care practitioners, and learn medical terms. But you don’t need to do it alone.

When you’re living with migraine, it’s invaluable to keep the lines of communication open with your family, friends and coworkers: they can’t understand what it’s like to live with migraine if you don’t talk openly about it.

Here are some tips and helpful insights we’ve learned from migraine patients:

When we stop doing the things we love, our mood drops, and it becomes even harder to get motivated. Keeping fun in your life is absolutely essential — make it a top priority. It boosts your mood, your relationships, and your energy level. Find one activity you love — even a small one — that you can add to each week without fail, and one you can add to each day. Once they become routine, you'll start feeling better and will want to add more.

Migraine is different for every patient. Don't hesitate to ask questions and get involved in decision-making regarding your health. And keep in mind there are many options available to you, so if one approach isn’t working, another one might.

Here are some tips on how to get the most out of your appointment with people on your healthcare team:

If you suffer from migraine headaches, it’s important to have strategies on sleep, regular exercise, proper nutrition and hydration, maintaining a migraine diary and stress management. Identifying and managing your triggers as well as proper posture are also important. Talk to your health care professional for more guidance. While there’s no cure yet for migraine, a healthy lifestyle certainly supports overall health.

Key elements of lifestyle have been recently published in the Cleveland Journal of Medicine (Volume 86, November 2019). Just remember the acronym “SEEDS”:

Poor sleep can be a migraine trigger.

Here is some general guidance to improve your sleep:

If you have been diagnosed with a disorder called “sleep apnea” (breathing stops and starts repeatedly while sleeping), your doctor will have specific advice for you. People with chronic migraine are more likely to suffer from sleep apnea.

Exercise may be helpful in managing migraine by decreasing the number of migraine days and reducing the intensity and duration of migraine headaches.

In the prodrome of a migraine episode, you may experience several symptoms including food cravings. The prodrome can occur up to 72 hours before a headache, so it can be difficult telling the difference between a craving and a trigger. Make sure to keep a careful record of cravings in your migraine diary.

Eating regular meals is particularly important for people who suffer from migraine headaches – migraine tends to be more common when meals are skipped, especially breakfast. Eating breakfast within 30 min to an hour of rising in the morning is considered to be optimal. Long periods of time between meals can trigger migraine attacks, or lead to more severe headaches because of low blood sugar levels.

In people with migraine, caffeine can act in a range of ways:

Caffeine can be in coffee, black, white, and green tea, energy drinks, soft drinks, chocolate as well as over the counter supplements and medications. According to Migraine Canada, the jury is out on whether its best to reduce caffeine intake (to 200 mg per day or lower) or to stop altogether. If you choose to reduce your caffeine intake, here are some tips:

Maintaining a migraine diary will help you and your doctor understand your current headache pattern, assess how you are responding to treatment, and monitor how much treatment you are using.

What you can include in your diary:

People with migraines tend to experience stress. Stress can trigger migraine and the pain of migraine creates more stress. Also, your body can get accustomed to stress so a weekend off (of work for example) can be a trigger leading to a “let down” migraine.

One of the most effective things you can do to control migraine is to reduce your stress.

Here are a few tips to reduce stress:

In addition to the above, there are specific techniques that can help you manage stress:

Some complementary non-traditional therapies may help with chronic migraine pain. These include:

Medical treatment for migraine includes medicines (pharmacologic treatment) as well as neuromodulation (which uses a device that uses electrical currents or magnets to adjust or change activity in the brain).

Pharmacologic therapies used for the treatment of migraine can be classified as:

With many drug treatments, medication overuse headaches can occur.

When medications taken to relieve headaches are taken too often, they can make the brain more prone to headaches and therefore contribute to the headache problem.

How medication overuse is defined depends on the medication class in question, for example:

Types of pharmacologic treatments that can be used to treat migraine headaches are listed below. Please note that the listings of side effects included here are not complete.

Neuromodulation devices use electrical currents or magnets to adjust or change activity that occurs in the brain. This technique may be used to help stop attacks that are already underway and it can also be used preventatively.

Side effects of neuromodulation may include light-headedness, dizziness , tingling, ringing in the ears, or the occasional headache.

Depending on the severity of your migraines, you may have one or more of the following people on your healthcare team:

Other healthcare professionals may also be involved, such as nurses and social workers.

Migraine Canada is a nationally registered not-for-profit organization dedicated to improving the lives of all Canadians living with migraine and other headache disorders.

The Headache Canada Network is a non-profit, research-oriented organization for migraine. Its mission is to study and understand migraine and provide education about the condition and its treatment.

Migraine Quebec is a not-for-profit organization founded in 2014. Its mission is to provide support and information to sufferers of migraine and their loved ones. 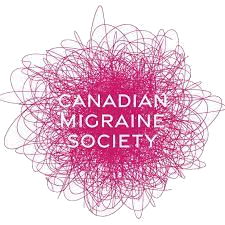 Patient-led community dedicated to empathy, education and empowerment for Canadians living with migraine.

Find a clinical trial near you 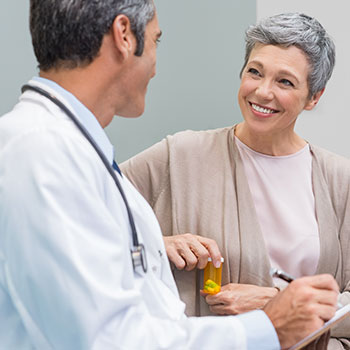 The essential about
clinical trials 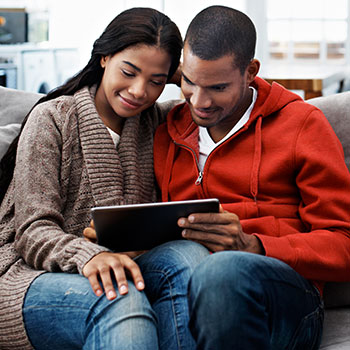 Preparing
for my clinical trial 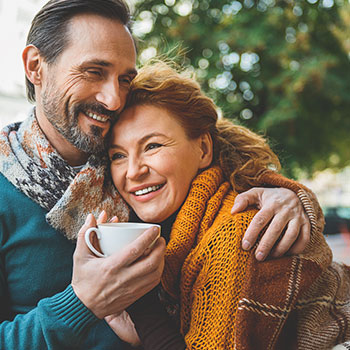 You are about to leave an AbbVie Canada site, a Web site maintained by AbbVie Corporation.

This link is provided for your convenience only. AbbVie Corporation takes no responsibility for the content of any Web site maintained by any third party and makes no representation as to the accuracy or completeness of any information contained on this or any subsequent link.

Do you wish to leave this site?